Turning a spotlight on the UK’s most dangerous drivers for Channel 5 and following Cheshire Police force as they crackdown on drunk, drug, dangerous and careless drivers, Britain’s Dangerous Drivers (w/t) will see the brutal reality faced by the Roads Policing Unit on a daily basis as they tackle the increasing rise in bad driving habits.

In Services to the Lake District (w/t) for Channel 4 the four-part series will look at what makes Tebay Service Station one of the UK’s most unique stopping points. The series will follow key members of staff, the Cumbrian farmers and producers who rally to maintain Britain’s most scenic pit stop.

Purple’s Pam Cavannagh and Dympna Jackson said: “‘We are thrilled to announce our first two commissions both shining a light on iconic northern precincts. Cheshire Police are at the forefront of cracking down on the UK’s dangerous drivers and Tebay Services Farmshop & Kitchen work tirelessly to support local Cumbrian suppliers.”

There are over 40 million vehicles on Britain’s roads and thanks to the popularity of dash-cams, the evidence of how many of those drivers are flouting the law is now easier than ever to document. With UGC content alongside eyewitness footage from the police patrol cars, the 1 x 60 documentary follows the Cheshire Police force as they track down dangerous drivers. The number of deaths and serious injuries in the UK caused by dangerous driving rose to 27,500 in 2019, however it is not just drunk and drug driving that causes that figure to be so high. From stolen vehicles to banned motorists, speeding violations and simple bad decisions, the human cost of people getting behind the wheel when they should not, is staggering.

The documentary was commissioned by Daniel Pearl for Channel 5. The executive producers are Pam Cavannagh and Dympna Jackson and Stuart Froude is producer/director. 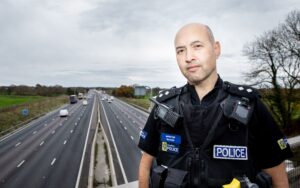 Services to the Lake District (w/t)

Set up in 1972 by local farmers, Tebay Services was the first and remains the only UK family-run motorway service station. With 4.5 million visitors a year, Tebay Services now more than ever is a lifeline to the local community who work and trade there, as well as the visitors who choose to stop at its services. Showcasing the stunning scenery of the Lake District and covering the stories of local traders and farmers for whom the M6 motorway and the service station is vital for their livelihoods, the series will provide an intimate insight into the rural community life of Cumbria and its relationship to the wider world along the M6 motorway at a time of increased uncertainty.

The series was commissioned by Channel 4’s Head of Daytime, Jo Street. The executive producers are Pam Cavannagh and Dympna Jackson and the series producer is Luke Lovell.